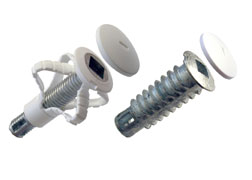 Cranston, RI—Few things can splash more cold water on the starry-eyed dreams of inventors quicker than the realities of developing and bringing a new product to market. A good business plan is key, but even more important is knowledge of the industry and the expert advice of trusted suppliers. Fortunately, George Allen of Inject Solutions had all three.

After many years in construction, replacing rotted and insect-damaged sills and framing, George thought there ought to be a better way for homeowners to protect against the ravages of pests and moisture. And when a long recuperation from hip replacement surgery gave him the time to work on it, he found the solution. His patented Thermal Wall Injection System and Treatment (TWIST) utilizes permanently installed injector plugs that allow the direct infusion of pesticides, wood preservatives and other chemical treatments inside wall and ceiling spaces where problems occur. After treatment, a plastic cap covers the plugs, making them very unobtrusive and allowing easy access for future treatments. Marketed both to homeowners and pest control professionals, it is the first safe and effective solution to deal with pest and moisture problems directly, and has already garnered positive attention in the pest control press.

But as every successful inventor knows, taking such a product from concept to reality can be a daunting and costly undertaking. For George, this process was greatly facilitated—and many thousands of dollars were saved—by the advice and assistance of die caster, Fielding Manufacturing.

“George's original design called for the injector plugs for his TWIST system to be cast from aluminum,” said Steve Fielding, President of Fielding Manufacturing. “But when he also said he expected to produce rather high volumes, I suggested zinc might be the better choice.” Aluminum casts at a temperature above the tempering point of die steel, Fielding explained, while that of zinc is lower. “Every shot with aluminum works to anneal the tool,” he said, “and after 100,000 to 150,000 units, you have to rebuild or replace the tool. Zinc die-cast tools are good for millions of parts.”

But it was in product development that Steve Fielding's expertise provided the most critical savings for start-up Inject Solutions. “My original design called for delivery slots at the inner end of the plugs to be spaced at 90° intervals,” said Allen. “Steve pointed out that thousands of dollars could be saved in tooling by making these slots closer together, and that rather than build the tool right away, we should test the design with rapid prototyping.”

As the plug geometry was rather straightforward, Fielding was able to machine prototype plugs from con-cast zinc bar stock which provides up to 85% of the strength of an actual die-cast part. This allowed actual in-use testing which validated the redesigned slot pattern. “In fact,” said George, “we actually get better coverage of interior bay surfaces with the offset slots than we did before.”

Prototype testing also highlighted the need for a number of other design changes, two of which had significant impact on the final product. The TWIST system utilizes two types of injector plugs, a self-tapping one for exterior wall installation, and a machine-threaded version with an anchoring mechanism for interior wallboard installation. The original design called for a metal toggle-bolt anchoring system, but Fielding suggested that a plastic, “molly” assembly would be less costly to produce and would also facilitate installation. And as Fielding is also an injection molder, the assemblies could be produced in tandem with the injector plugs.

The final design alteration involved the cap for the system. “George was looking for an off-the-shelf cap he could adapt for his purpose,” said Steve Fielding. “We suggested that a custom molded cap would not only function better, but would also enable him to brand his product. We added two mating indents onto the plug flange and designed a quarter-turn, twist-on cap that has his website—www.injectsolutions.com— embossed on its face.”

The mating indents also had an unexpected benefit for installation of the final product by providing an orienting feature to position the dispersion slots for maximum coverage. “The whole system is designed to be installed with a one-inch drill and a half-inch socket or extension,” said Allen. “In fact, the plastic molly design on the interior plugs works so well, you can snug them up using a half-inch ratchet extension like a screw driver.”

All in all, the prototyping and testing process not only proved the original product concept, but resulted in a production part that improved upon the concept, was more economical to produce, and provided a branding mechanism that was not even imagined in the original. And it saved nascent Inject Solutions many thousands of dollars in the process. “Steve has helped me tremendously,” said George. “And I've got a better product as a result.”

Founded in 1962, Fielding Manufacturing specializes in the manufacture of high precision miniature die-cast and injection molded components. The company provides a full-service solution that begins with design for manufacturability, rapid prototyping, tool design and reliable parts production, and extends through a complete range of secondary operations and finishing. Fielding Manufacturing has a strong reputation for quality, service and dependability, and offers a wealth of experience in a wide range of industrial markets, including telecommunications, fiber optics, hardware, electronics/electrical, automotive, fasteners/threaded components, appliance, and consumer.

To be added to the electronic distribution list, please e-mail laurenr@trankin.com

Fielding pushes the envelope on efficiency and precision in miniature parts production. Our integrated systems approach drives quality up and cost down.

For a quick quote on your part, send a sketch, print or solid model to
Request Info/Quote. Or just give us a call.